Grandad (John Scott) was a British child migrant.  As a young boy he was sent from Bridge of Weir orphanage (near Glasgow, Scotland), to live in Australia at Burnside Orphan Homes (Pennant Hills Road, Parramatta, Sydney).  He left Burnside as a teenager and worked at various labouring jobs around Australia before marrying Marion Edgecombe in October 1953.

John was young when he left Scotland, and remembered little of his mother or family there.  He certainly never spoke about them or his childhood.  And so in the 1980’s John Scott’s family tree consisted only of his wife, four children and grand-children.

In 1983 Uncle Gary went to the UK on holidays and got Johns records from the orphanage at Bridge of Wier.  With this information and a little old-fashioned detective work (pre-google!), the family discovered that not only was Johns mother still alive, but that he had half-brothers and sisters!  Early in 1984, when Nancy Edgecombe (Marion’s stepmother) organized a trip to Britain, she took Marion and John with her.

It was Johns first trip to the UK since he had been sent to Australia as a child. Goodness knows how he felt arriving back in the UK.  By all accounts he was quite bitter about his childhood and being sent to Australia, and always said the orphanage in Scotland was nicer.  Did it feel like he was coming home? Familiar perhaps? I wish I had asked him.

As part of the trip, John finally saw his mother again. Oh to have been a fly on the wall that day.  Although it was amicable and perhaps settled some queries in Johns mind, she did not open up about the family, Johns father, or her family even.  And so rather than open doors…it made them slightly ajar. A little glimpse behind. Sadly she died not long after they met and so many questions remained…just waiting for someone to do some digging… 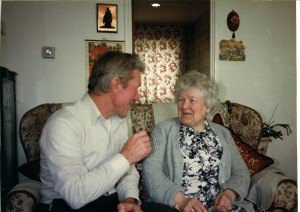